In this WhatHammock exclusive, Clark Jungle Hammocks founder Gary Clark gives us the low-down on why he made his first hammock, who uses them (and where), what he thinks of key competitor Hennessy's products and much more.

Hi Gary and thanks for giving us your time. What drove you to create your first hammock back in 1965?

In the early 1960's, tents were mostly made of canvas. I was a Scout Master at the time and did a lot of backpacking with the boys. I was always looking for ways to make backpacking lighter.

I had started an advertising business in which I flew hot air balloons over cities and towns with banners attached. That was when I had the idea to build tents out of the same nylon material from which the balloon was made. I made several designs of these nylon tents, which was a very new concept.

It was about that time that I designed my first nylon hammock. I liked the idea because it was very lightweight, packed up small and kept me off the ground. I have always hated sleeping on the ground.

What did you feel was missing from the hammocks available at the time?

Army surplus canvas hammocks were the only option around at the time. They were heavy and very bulky. Mosquitoes could bite you right through the bottom and they were very unstable; one could fall right out it if he moved the wrong way. They had no pockets for gear and no provision for keeping warm.

Still, it was partly some nostalgia for these rugged WWII hammocks that resulted in the first lightweight camping hammock that we built in 1965.

What do you believe sets Clark jungle hammocks apart from their competitors?

Because of the patents that protect the Clark Jungle Hammock, we are set apart from our competitors. I feel that even the hammock I built in 1965 would compete well with any other hammock on the market today.

The Clark Jungle Hammock combines many features that are not available anywhere else. When you consider that the Clark hammock has built-in storage for gear, built-in insulation against the cold, a built-in breathable zippered cover, the only mosquito-proof hammock bed on the market, a built-in compression sack, a quality sil-nylon tarp with catenary curves to shed wind, and a stable design that won't tip, it's really the Cadillac of lightweight camping hammocks.

We make them with pride in America from American materials, and that will never change if I have anything to do with it.

As you evolve your hammocks with user feedback in mind, what are the product trends and use desires you see? Is it all about weight? Protecting trees better?

First of all, we feel that ground tents are far more destructive to the environment than hammocks will ever be. If everyone used hammocks, and used them responsibly, you wouldn't be able to tell where they had been used. This cannot be said of ground tents.

Even though weight is very important, you can concentrate only on weight and forget that ease of use, comfort and convenience are important too. For example, it makes no sense to use a very light hammock and then freeze when temperatures drop only to 40 degrees F. And it doesn't make sense to get soaked because your rain fly isn't big enough to keep you dry.

We subscribe to the concept of "comfort-weight", where you balance the weight of your hammock against the comfort and features it provides. We try to maintain an optimum ratio for our hammock models.

Do you see a gradual trend of users moving from tent to hammock camping? Or are the views of these two camps fairly set?

I find that there are many 'died in the wool' tent users, and hammocks are a new idea for many. However, having a lightweight and convient shelter that keeps you off the ground will always be desired. I see the switch from tents to hammocks growing steadily. It's just a matter of education.

Which is the most popular hammock you sell today (February 2011) and who is buying this product?

I would say the North American Model is the most popular Clark hammock right now probably because it was our first major model with nice cold-weather features and it is well-priced considering what it is.

However, our newest four season models that include flexible poles (NX-150 and NX-250) are steadily overtaking the North American in popularity.

People who backpack the Appalachian and other trails are buying these hammocks in great numbers, but kayakers, canoeists, bikers, cyclists, tree climbers and others are also seeing the value of a lightweight compact shelter that is easy to deploy.

We also sell the only true 2-person camping hammock, a patented product that is growing in popularity with all of these groups.

Who is a typical Clark buyer? What are this person's hobbies, and during what types of activities and trips do they use their Clark?

We have been surprised by the great diversity of our customers. We sell our hammocks to more than 45 countries, to all branches of the US military including various Special Forces and Navy Seals, to Scout Masters, National Geographic photographers, Drug Enforcement agents, missionaries headed into the jungle, and to adventurers of every type.

In the end, we sell to anyone headed into a challenging environment, which could be as close as Minnesota or as far away as Madagascar.

Why do you choose only to sell Clark jungle hammocks direct to customers? How does this relatively unusual model benefit you and the end customer?

Retailers call us all the time asking to sell the Clark Jungle Hammock line. We politely decline for a few reasons.

First, we truly enjoy the personal, direct contact with each customer. We want to hear exactly where the hammock is headed and make recommendations. We also like to get direct feedback that helps us improve our products. Another big reason that we sell direct is because we do not want to make our products in China or Indonesia. We want to make them here in America, but still sell them for reasonable prices. For us, selling through stores would mean a higher price to the consumer, plus building the hammocks in the United States would be even more difficult.

In the end, selling directly to customers gives us greater control to make quick changes to our products, quickly implement new ideas, and enjoy what we do.

Your main competitor seems to be Hennessy Hammock. What would you say are the selling points that would cause a consumer to choose a Clark over a Hennessy?

Mr. Hennessy introduced his hammock a year or two after we started selling the Clark Jungle Hammock line. I think his idea is very innovative. The marketing of the Hennessy hammock introduced much of the world to this great method of camping.

We have found that many of our customers are former Hennessy owners who are ready for more. Clark offers meat to those that have only had milk. I understand that Hennessy hammocks are starting to emulate Clark hammocks by offering more convenient zippered entries.

You will see that the more a competitor's hammock improves, the more it will look like the original lightweight camping hammock: the Clark Jungle Hammock.

Looking ahead, what do you imagine a Clark hammock will look like in two or even ten year's time?

It is hard to predict what changes will be made to our products. Every time we believe we have reached perfection, we find some other improvement that we feel the hammock cannot do without. However, just as I saw that nylon was needed to replace canvas, improving technology will no doubt produce more possibilities for even stronger, lighter products.

Gary, thanks very much for your time. 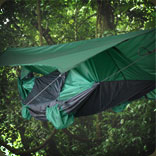 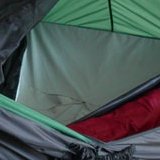 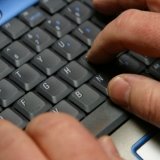 Review your hammock for your chance to win